Fighting for a life 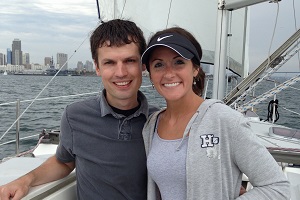 One patient’s lifelong battle against back pain and depression

Sheryl’s pain began like most people who suffer from back pain – it was sporadic and associated with certain movements. She coped, like many, by modifying her behaviors, telling herself to be strong, and allowing her mother to help by massaging the affected area. Why her mother? Because Sheryl was just 11 years old when the pain began.

Sheryl lived with this terrible back pain as a child and teen, all the while never wavering from her focus on being an accomplished violinist and eventual youth symphony instructor. Unfortunately, each time Sheryl played, the pain spiked and worsened. It wasn’t until Sheryl was 18 that she hit her breaking point. As she packed up after that long day of teaching and playing, the pain reached excruciating levels and she was barely able to move her arms to drive home.

Sheryl finally decided to see a doctor for her pain. He identified she had a hemivertebra at T3 (spinal curvature), and diagnosed it as scoliosis. Unfortunately, he didn’t have any idea how to treat it. Without a solution, the doctor visits didn’t stop. It took more than 10 specialists and 10 years before Sheryl was finally correctly diagnosed as having a deformity of the spine and not scoliosis.

“I’d done tons of research on one particular doctor and was so hopeful about his experience with spine issues,” Sheryl explained. “Then he said I was going to have to live with this, because he didn’t feel right operating on such a mild case of scoliosis, and I hit rock bottom. I was in a truly dark place and couldn’t imagine living the rest of my life like this.”

At this point Sheryl was in her late twenties, she’d gotten married and to this day she still isn’t sure how she was lucky enough to find her husband, Tim. “I remember me being a happy, spunky person, but Tim never knew that version of me,” she explained. “He came in the middle of my darkest hour and loved me anyway.”

Losing herself in the pain

After the diagnosis that she’d have to live with the pain, Sheryl gave up playing and teaching violin, a career she loved. She spent much of her time in bed, living with the tremendous guilt that she wasn’t contributing. To make it worse, she began to isolate herself from family and friends when those close to her insinuated her pain was in her head. Her husband and one other close friend were the only people she felt she could confide in. “I felt like I didn’t know myself anymore,” she said. “The person in the mirror was a complete stranger and my family didn’t know how to support me through this any more than I knew how to handle it.”

Tim was the one to realize how emotionally depressed and desperate Sheryl had become and it was he who provided the first glimmer of hope in a senior Golden Retriever named Nanette. “She was older, chill, and so sweet,” Sheryl explained about her dog. “Her love and warmth saved my life more days than I can count. Just having her there kept me from being fully enveloped in the dark thoughts that came when I was alone and miserable.” As Sheryl embraced Nanette’s presence and tried to wrap her mind around living with back pain for the rest of her life, she continued to search for answers.

The road to a solution

Accepting that there were no good surgical options, Sheryl began consulting with a pain specialist to try to manage her pain. The process was slow, the drugs she tried created a host of side effects and only after a year of trial and error did they find a cocktail of medications that merely helped take the edge off the pain. That edge however, gave Sheryl the peace of mind and emotional stability to reevaluate her situation.

Sheryl and Tim decided that if pain management mode was where they’d spend the rest of their marriage then they should do it in a more temperate climate, which brought them to San Diego. As soon as they moved, she sought out a pain clinic to continue her therapy. It was there that Sheryl learned about Dr. Greg Mundis at the San Diego Center for Spinal Disorders.

“Dr. Mundis determined that my back pain was not caused by mild scoliosis, but a deformity of the spine,” Sheryl explained. “He was the one who explained the difference between spinal deformity and scoliosis, and finally, my pain made sense. I’d wished for my whole life to find someone out there going through what I was, or someone who understood this was real. When he said it could be resolved with a spinal procedure he specialized in, I finally started to get my hope back.”

Finally, surgery day arrived and after seven long hours on the table Sheryl awoke to her family around her and the relief that she had indeed made it through. She was sporting a few new cobalt-chrome rods and nine titanium screws, but her misshapen vertebra was gone.

Unfortunately, due to Sheryl’s previous pain management regimen, the team struggled to manage her pain postoperatively making her recovery a challenge. “Added to the post-op pain was the fact that I hadn’t been able to work out in years. I had no core strength to speak of, so after the surgery I spent ten months on my back.” Luckily, her mother stayed with her for three weeks after surgery and helped with cooking, cleaning and support for both Sheryl and Tim.

Now, Sheryl is in physical therapy and has her eyes on a different prize. “The surgery was 100 percent successful,” she said. “The pain, the migraines… everything is gone. They fixed the problem and now I’m regaining strength and stamina. I pass people on the street and smile at them. I’m 31 years old and I’m ready to live my life. I’m ready to play my violin again.”

Does this story sound similar to one your loved one is going through but you aren’t sure how to help? Take a look at this letter from a caregiver to a back pain sufferer.