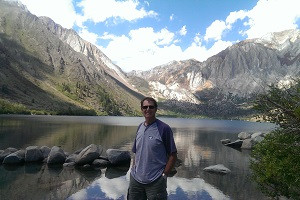 Chuck has always led an active, mobile lifestyle despite having scoliosis and back issues for nearly 14 years. Up until he retired a few years ago Chuck ran factories, which had him walking around talking to people all day long. He loved to go to the gym or dance to keep fit, and even took up golfing at age 50. It wasn’t until he started feeling shooting pains down his legs that things changed, and he decided he needed to seek help.

The doctors determined that genetics, including scoliosis, led to Chuck’s back issues. In 2000 he had his first spine surgery to address a collapsed disc pressing on his sciatic nerve, and had his L3, L4, and L5 vertebra fused. Then nearly seven years later Chuck went in again for surgery due to a constricted spinal cord. His surgeon performed five laminectomies and fused his L2-L3 and L5-S1 vertebrates. After each surgery Chuck chose to quickly discontinue the use of pain meds, and rely on exercise to help with recuperation. As an active participant in his own recovery, Chuck would sometimes walk five miles a day. He devising his own walking paths and tracked his progress. His wife also helped push him along in his path to recovery. “She’s a hiker and always moving. She’s great at not letting me get complacent,” Chuck explained.

In 2013, after fulfilling his lifelong retirement dream of seeing the world with his wife, Chuck started to get numbness in his legs and hips. His previous surgeon had moved away so he had to choose a new one. That’s when Chuck began to see Dr. Donald Blaskiewicz, a neurosurgeon at Sharp HealthCare. Dr. Blaskiewicz did numerous tests and evaluations before deciding on treatment. In 2015, after attending a pre-class for those having surgery, and coming to appointments with all his questions written down, Chuck felt fully prepared for his pending Anterior Lumbar Interbody Fusion (ALIF).

“I knew he was going to go in, take out all the old hardware (from previous surgeries), and put new rods and screws in different places,” Chuck said. Eleven hours later, Chuck finished his third and final back surgery, which combined anterior and posterior interbody fusion. After recovery and another round of physical therapy, he’s back on the golf course, traveling, and trying to keep up with his wife.

. If you’ve had previous spinal surgeries and are still living with back pain, try our surgeon locator to find someone who might be able to help.